SETLA is an affiliate of the Texas Longhorn Breeders Association of America and was founded in 1983 by a small group of breeders east of the Mississippi who found a common love for the Longhorn breed. Today, the Association has 40 members in three states. Our members include hobby breeders, as well as serious breeders who have made raising Longhorns their business. We invite you to become part of our organization and experience the excitement of this magnificent breed.
We also schedule field days and ranch tours each year which provide the opportunity to see how fellow breeders operate their programs and to provide education and support for the Longhorn breeder. It is a great opportunity to enjoy fellowship with old friends and make new friends in the Longhorn industry!
Texas Longhorn Cattle 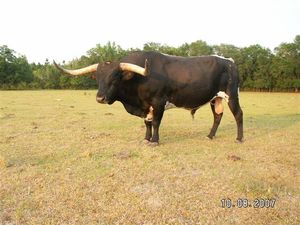 The descendant of hardy Spanish cattle, the Texas Longhorn can thrive in country where no other breed can live; subsist on weeds, cactus and brush; range days away from water; and stay fit and fertile whether it’s living in the scorching, parasite-infested tropics or in the arid, subzero winters of Montana.
The leaner Longhorn beef was not as attractive in an era where tallow was highly prized, and the Longhorn's ability to survive on often poor vegetation of the open range was no longer as much of an issue. Other breeds demonstrated traits more highly valued by the modern rancher, such as the ability to put on weight quickly and not have horns long enough to gouge people. The Texas Longhorn stock slowly dwindled, until in 1927 the breed was saved from almost certain extinction by enthusiasts from the United States Forest Service, who collected a small herd of stock to breed on a refuge in Oklahoma. A few years later, J. Frank Dobie and others gathered small herds to keep in Texas state parks. They were cared for largely as curiosities, but the stock's longevity, resistance to disease and ability to thrive on marginal pastures quickly revived the breed as beef stock. Today, the breed is still used as a beef stock, though many Texas ranchers keep herds purely because of their link to Texas history.
In other parts of North America this breed is used for much more. Longhorn cattle have a strong survival instinct and can find food and shelter during times of rough weather. Longhorn calves are very tough and can stand up sooner after birth than other breeds. Longhorn cattle can breed for a long time, well into their teens. There have been cows that have bred for up to thirty years. Some ranchers keep Longhorns for their easy calving. A Longhorn cow will often go off on her own to a safe place to have the calf then bring it home. They are also known to hide their calves in safe places to avoid predation, sometimes causing difficulty for ranchers, who may need to work on the animal. 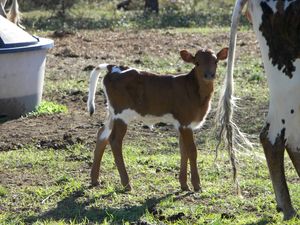